The weeks leading up to Easter–Ash Wednesday, Lent, Holy Week–are often filled with somber reflection. Even as I write this, it’s a gray and gloomy Good Friday as though nature itself mourns the memory of what Christ did. I get that–we should reflect on what our sin cost our Savior. We need to remember we were lost and hopeless in our sin, and Christ paid a terrific price for us. 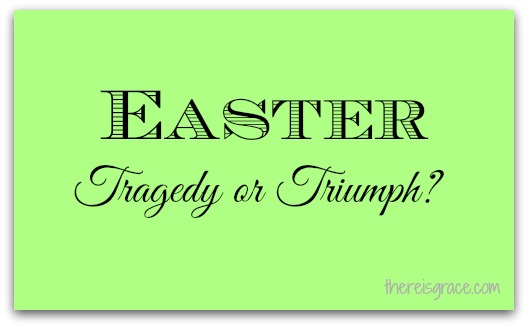 In reading through the crucifixion story this week, one overwhelming theme jumped out at me: God was always in control.

It was His plan. He called the shots.

Now on the first day of Unleavened Bread the disciples came to Jesus, saying, “Where will you have us prepare for you to eat the Passover?”  He said, “Go into the city to a certain man and say to him, ‘The Teacher says, My time is at hand. I will keep the Passover at your house with my disciples.’ (Matthew 26:17, 18)

Did you see that? It’s a whole week before Christ would go to the cross, and He’s already in control of the situation. He is aware of what’s coming, and He is already prepared for it.

And later, when He was betrayed…

Do you think that I cannot appeal to my Father, and he will at once send me more than twelve legions of angels? But how then should the Scriptures be fulfilled, that it must be so?” At that hour Jesus said to the crowds, “Have you come out as against a robber, with swords and clubs to capture me? Day after day I sat in the temple teaching, and you did not seize me. But all this has taken place that the Scriptures of the prophets might be fulfilled.” (Matthew 26:54-56)

I love this moment in the story. Jesus–who is fully God even though He is fully man–had full authority to summon the powers of heaven and deliver himself from danger. But He didn’t. He willingly gave himself up. Why? So that Scripture might be fulfilled…not just a centuries-old prophecy, but a promise to bridge the gap between a Holy God and an unholy people. A promise rooted in God’s love for us–every. single. one. of. us.

Easter: a promise to bridge the gap between a Holy God and an unholy people. A promise rooted in God’s love for us–every. single. one. of. us.

And behold, the curtain of the temple was torn in two, from top to bottom. And the earth shook, and the rocks were split. The tombs also were opened. And many bodies of the saints who had fallen asleep were raised…When the centurion and those who were with him, keeping watch over Jesus, saw the earthquake and what took place, they were filled with awe and said, “Truly this was the Son of God!”

At the moment Christ breathed His last, a great earthquake struck, tearing the temple veil from top to bottom and cracking wide the tombs. It was as though God wanted to reiterate: “This was not man’s doing; this was My doing.”

And my favorite part…

Now after the Sabbath, toward the dawn of the first day of the week, Mary Magdalene and the other Mary went to see the tomb…But the angel said to the women, “Do not be afraid, for I know that you seek Jesus who was crucified. He is not here, for he has risen!” (Matthew 28:1-6).

This was it: the pinnacle of God’s plan.

The cross was a superb triumph in which the foundations of hell were shaken. ~Oswald Chambers

The ultimate plan bringing the ultimate victory. If there was ever cause for celebration, I’d say that is it!

Easter: The ultimate plan bringing the ultimate victory. If there was ever cause for celebration, I’d say that is it!

Yes, let’s reflect on Christ’s suffering today. And YES! let’s celebrate His resurrection on Sunday. But let’s not limit our reflection and celebration to one week a year. Let’s celebrate His victory in our lives each and every day!