It all happened in the same week. I was officially pronounced “cancer free” then a few, short days later I lost my mind…over a pair of gloves.

We were running late, yet no one was following the simple instruction to “please move more quickly.” The whole scenario escalated until it resulted in a wild-eyed mom (who will remain nameless) barking orders at her startled children as she threw backpacks and lunches in their general direction then marched them, in a huff, to the waiting vehicle.

Then it happened: A sheepish voice squeaked from the backseat, “I forgot my gloves.”

For a moment, I considered foregoing the gloves, but with Missouri winter setting in, and a wind chill of 26, the child had to have gloves. I slammed the door and stomped back into the house to retrieve them. Back in the vehicle–gloves in tow–we were finally off to school.

Then it struck me: I would not have reacted this way a year ago. At this time last year, my mental and emotional energy was focused on one thing: victory over cancer. That meant regular, daily, time in God’s Word to hold tightly to His promises and regain control of my thoughts and emotions. It meant “little” things like lost gloves and hurried mornings didn’t faze me. There were bigger mountains to climb, bigger giants to slay–I was battling cancer for cryin’ out loud. Who cared about forgotten gloves?

Here I was a year later, the words “cancer free” still ringing in my ears, and I was already back to the same ol’ me. I had kicked crazy to the curb, and it had bounced back and rolled right over me!

While I was thankful that life was returning to normal, I didn’t like that I was falling back into the same habits. In the midst of the battle, I had been intentional about so many things–faith, priorities, commitments, even my attitudes and emotions. As a result, I had grown in many of those areas. Was I seriously going to go back to the same old habits and struggles as before? I sure didn’t want to! The trial I had faced brought me closer to God and took me deeper in my faith.

Count it all joy, my brothers, when you meet trials of various kinds, for you know that the testing of your faith produces steadfastness. (James 1:2, 3)

If I was going to hold on to all I had learned over the last year, I would have to Be Intentional about it. Focusing on the important things had been easy when the rest of the world stopped–when others were bringing meals and shuttling our children about. Now that life was returning to “normal,” I would have to work at it. 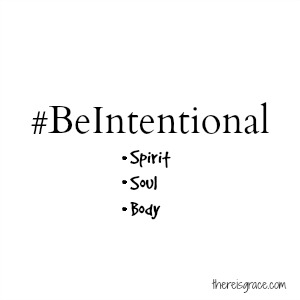 Since I’m pretty sure intentionality isn’t something I struggle in alone, I’m inviting you on the journey with me. And what better time to do it than at the New Year?

Over the next few weeks, we’ll be exploring intentionality in many areas of life–spiritual, physical, and emotional. In addition to my regular posts, I’ll  write once or twice a week about an area in which I’m learning to Be Intentional. I’ll be honest about how I’ve failed or where I need improvement (as if you expected anything less) and share things I’ve discovered along the way. I’ll also recommend resources I’ve found helpful or that come recommended by others I trust.

This isn’t a one-sided conversation, though. I want to hear from you, too! I want to know how you’ve learned to be intentional and what has helped you along the way. Share your favorite tips and resources in the comments or join the conversation on social media (use the hashtag: #BeIntentional)

What areas do you need to Be Intentional in?