I am honored to have a new friend guest posting today. When I first read Katie’s blog, Operation Leap of Faith, I liked her immediately. Her witty and comfortable writing is like getting a letter from a lifelong girlfriend. But it was the “meat” of her writing that really stuck with me.

When I found out she and her husband work in orphan/foster care while raising their three rambunctious boys…well, my respect for her went through the roof! Welcome, Katie! 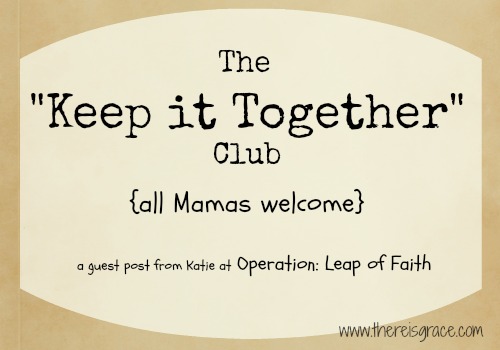 We had been up and down the aisles long enough. He’d gone through the Goldfish crackers and now he was waving the coupons in the air and dropping them to the ground like we were our own miniature ticker tape parade.

We had just moved to the neighborhood and this first-time mama was mighty proud to be successfully grocery shopping with the little one AND with such a valuable $10 off “Welcome to the Neighborhood” coupon in hand. Well, in his hand.

After meandering our way through the new grocery store we made it to the checkout. I glowed in the light of being such a fiscally responsible wife and mother. Oh, the pride I would feel when I handed over my mega-coupon! Physical proof that I was a successful, smart, good-steward-of-our-finances kind of woman.

The coupon wasn’t there.

It had been in my toddler’s hands. He’d waved it around up and down the aisles. Remember the parade? But it was nowhere.

A lot rested on this coupon in my mind so I plucked the baby out of the cart and ran up and down each aisle like a crazed maniac. The little one thought this was hilarious. I was sweating profusely.

Nowhere. It was nowhere. And I felt like nothing.

You would’ve thought I had misplaced my wallet or my child or my own head. Failure played loudly in my ears–a painful yet recognizable tune. I quietly paid my bill and slowly rolled the cart out into the day.

There is a universal truth of mamas the world over: we are all card-carrying members of the “keep it together” club. Only none of us can live up to those standards so we carry this membership around in our too-heavy purses and just feel bad every time we think about the ways we haven’t lived up to our own ridiculous expectations.

There is a universal truth of mamas: we are card-carrying members of the “keep it together” club.

Why do we join that club? Who is the president? Impeach! Impeach!

I unloaded the groceries from my cart as I mentally kicked myself. “You might as well have flushed a $10 bill down the toilet,” I thought. “Ten dollars is a big deal. A BIG DEAL! And you just lost it!

The last bag was finally put away. I lifted my little one out of the cart.

His little arms wrapped around my neck and squeezed. A hug. But not just any hug. It was the very first hug he ever gave me. Ever. Right there in the grocery store parking lot. Right after I lost that oh, so important . . . what was it again?

God gave me that moment. I knew it down to the very marrow in my bones. He thrust it upon me, making me stop right there in my tracks on a dangerous path I was traveling. It’s as if He was saying, “Your identity is not found printed on a piece of paper. Your identity is engraved on the palms of my hands. I want you to know the difference.”

See, I have engraved you on the palms of my hands; your walls are ever before me. (Isaiah 49:16)

Your identity is engraved on the palms of God’s hands.

If I were to describe the tangible arms of Jesus–right then and there–they were one-year old arms, clasped ever so tightly around the neck of this mama. Not in some picture perfect movie scene but in the parking lot of a little Pasadena grocery store. My milk and eggs were growing warm in my hot car but you better believe I didn’t move from that spot until his arms let up.

And they didn’t let up for a long time. Neither did the tears.

The meaning of that hug was not lost on me.

Yes, I think I was meant to lose something that day. That membership card? With those unrealistic, graceless expectations of myself as a mama? Oh, yes. That hug all but tore it up and threw it in the air–like my very own miniature ticker tape parade. 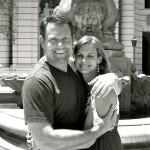 Katie Kenny Phillips lives in Atlanta with her husband, Jeff, andtheir five hilarious kids (three biological boys: Bigs, Middles and Littles and two foster children: Little Man and Baby Girl). Their home is made up of two parts Legos, one part dirt/sticks/rocks/acorns and all parts “whose underwear is this and why is it in the middle of the family room?” She and her husband just started an orphan/foster care ministry at their church and are excited to become foster parents themselves in the next few months. Follow Katie’s awesome adventures in foster care at Operation: Leap of Faith.

15 thoughts on “The “Keep it Together” Club (All Mamas Welcome)”