This summer, my family and I visited the beach. That’s a pretty big deal for this Midwestern girl. I can probably count on two hands the times I’ve seen the ocean up close and personal.

As every girl knows, a trip to the beach requires a new swimsuit…which, of course, means the dreaded trip to find a new swimsuit. Such a trip would have been traumatic enough in my 20s as I would have lamented over my not-so-supermodel physique. (Oh, the things we worry about in our 20s!) It would have been slightly more troubling in my 30s as I attempted to camouflage the effects of birthing two babies and the toll those babies had taken on my body. But in my 40s…

Well, in my 40s one would hope it would have been different.

I’ve heard it said, and I believe it to be true, that after 40 you really don’t care what others think. Sure, I’d like to look like Cindy Crawford, but that ain’t gonna happen. I’ve stopped holding on to the dream. I have finally found comfort in my own skin and come to grips with my own physique…cue the victory parade!

But now I faced a new obstacle: scars. 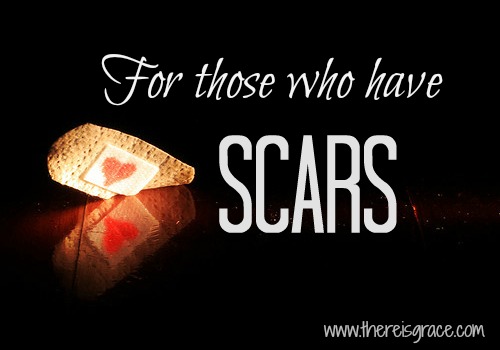 My first surgery in 2010 left me with a 6-inch scar running down the back of my left thigh. Of course I know it’s there, but since it’s on the back of my leg and it’s faded over the last few years, it’s easy to forget about. This time, however, there was a new scar, and this one wasn’t so easy to hide…my port.

For those who don’t know, a port is a small device implanted just under the skin for the purpose of delivering chemotherapy drugs. While I am thankful to have had it during chemo, I wasn’t looking forward to toting it along on my vacation. It’s implanted right under my right collar bone, so it was easy to cover up with clothing through the long, cold winter. But now it was swim suit season. That was a whole new ball game.

Unlike the one on the back of my leg, this was one scar I could not ignore. When someone looked at my face, there it was…a few inches below my chin, looking like it was about to burst out from under my skin. It was unmistakable. It was unavoidable.

They would know that it’s more than an ugly protrusion under my skin.

More than a disfigurement.

It’s a physical marker of the battle I am waging. A weapon in my arsenal.

That’s the thing about scars…those of us who have them understand what they represent. We don’t see the ugly or the imperfection. We see the struggle. The fight. The victory.

As I type this, I am recovering from yet another surgery, and I have yet another scar. Before all is said and done, I’ll likely have two more.

I don’t like scars. Not because they’re ugly, but because they represent pain. Deep pain. Pain no one should have to endure.

They remind us of a time when we were weak, vulnerable.

And for that reason, I’m learning to appreciate my scars. I don’t know that I’ll ever grow to love them. But I pray I will always remember what they represent…

“My power is made perfect in weakness.” Therefore I will boast all the more gladly of my weaknesses, so that the power of Christ may rest upon me. 10 For the sake of Christ, then, I am content with weaknesses, insults, hardships, persecutions, and calamities. For when I am weak, then I am strong.” (2 Corinthians 12:9, 10)

4 thoughts on “For Those Who Have Scars…”