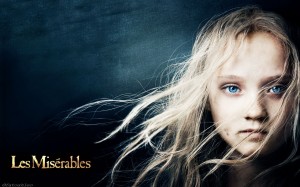 A couple of weeks ago, Hubby and I had a rare date night (sadly, the first in several months for us). My husband, a good sport and an even better husband, indulged me and took me to see Les Miserables.

The experience was simply amazing, and I don’t just say that because it was my first time inside a theater in almost a year. The movie was, on all fronts, overwhelming. The music, the costumes, the cinematography, the acting were all powerfully moving. However, my purpose in this post is not to discuss the aspects of filmography. (For a thorough and well-spoken critic of the movie, see this article.)

What I want to talk about is the message of the story. I am, most likely, one of the few people in the world who was only slightly familiar with the century-old Victor Hugo story: I knew the names of some of the characters and found myself singing along with some of the songs, but had never read the story or seen the production in full.

As I watched the story unfold, I was overwhelmed by the recurring demonstrations of grace in the story….genuine, undeserving, freely-given grace.

[Spoiler alert: If you are also one of the rare beings who have not read or seen the story, be warned I give away critical pieces of information in the following.] 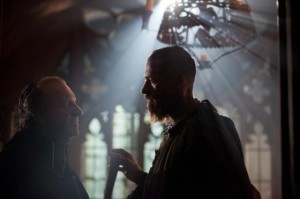 After years of mistreatment in prison, and weeks of mistreatment on the streets, Valjean is shown kindness by the priest. How does he respond? He steals the only possession of value the humble priest owns. When he’s arrested and returned to the priest, you’re sure he’s headed straight back to prison (at least I was, because I hadn’t read that far in the book). Instead, the priest (who had just been grossly mistreated by the one to whom he had shown kindness) responds with grace.

Not only does he refuse to accuse Valjean, the gracious priest kindly offers Valjean the two silver pieces that were left behind in his hasty escape. He says to Valjean:

God has raised you out of darkness; I have bought your soul for God!

I’m fairly certain I would not have responded that way if someone had repaid my kindness by stealing from me! Yet, it is that very act of grace that is a pivotal moment for Valjean, and in the next scene we see him make a radical transformation and commit to become a new, and better, man. Sound familiar?

“Therefore, if anyone is in Christ, he is a new creation; old things have passed away; behold, all things have become new (2 Corinthians 5:16, NKJV)”

I couldn’t help but feel a little tinge of conviction: If grace is so powerful that, when given, it can potentially change the course of a man’s life, why am I so often stingy with it when I feel I have the right to be? 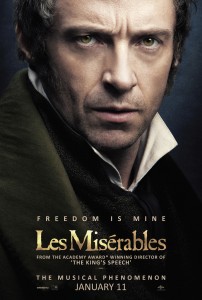 Jean Valjean
Having been the recipient of grace, Valjean leaves  his old life behind and commits to “begin another story.” He builds what most would consider an honest, successful life.

He could have stopped there….having built a successful business, shown kindness to his employees, and given back to his community. Many would agree that was sufficient payment for the grace he was shown. But Valjean remembers the grace he was given, and makes a point to extend it to others.

When he realizes the injustice Fantine has suffered under his leadership, he takes responsibility for it. He doesn’t simply toss her some loose change or buy her some clothes (although those would be honorable acts), he makes it his mission to fight for her life and spends the rest of his life fighting for her daughter.

Lord, when did we see You hungry or thirsty or a stranger or naked or sick or in prison, and did not minister to You?’  Then He will answer them, saying, ‘Assuredly, I say to you, inasmuch as you did not do it to one of the least of these, you did not do it to Me (Matthew 22:44,45)

Ouch. There it is again…that feeling of conviction: I have been given grace freely, much like Valjean. Why then, is it so difficult to freely give what I have to those in need? To make myself even a little uncomfortable so that others might find physical comfort, and in doing so, open their hearts to the love of God? 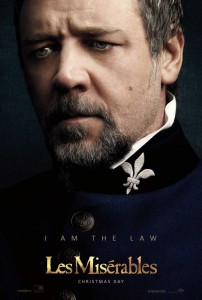 Javert
Javert was, in my opinion, the most disturbing character. Not because he was so fierce, but because I could identify with him so much.

I’ve read that Russell Crowe’s portrayal of Javert has come under criticism. I don’t know how it compares to the same character in the musical production (or the book for that matter…I’ll get there), but I deeply identified with the movie version of Javert.

He doesn’t hunt Valjean out of anger or vindication, he does so from a strong sense of wrong and right. He so identifies with the law, he is compelled to uphold it. He truly believes he is carrying out the work of God.

What struck me most was the moment that both men prayed to God: One prayed to escape his pursuer, the other prayed God would help him bring the thief to justice. Both men, on opposite sides, believing they were each doing right. The irony was that Valjean, the “outcast,” was the one who had truly encountered grace while Javert, on the side of “right,” had only known the law.

And must I now begin to doubt,
Who never doubted all those years?
My heart
is stone and still it trembles.
The world I have known is lost in shadow

Javert is so bent on carrying out the “judgement” of God, he cannot fathom grace. Even when he is shown such grace by the very one he pursues, he cannot accept it. His obsession with the law and his unwillingness to accept grace eventually lead to his death. How tragically sad, and how hauntingly familiar.

“When the kindness and love of God our Savior appeared, he saved us, not because of righteous things we had done, but because of his mercy. He saved us through the washing of rebirth and renewal by the Holy Spirit, whom he poured out on us generously through Jesus Christ our Savior” (Titus 3:4-6).

As Christians we have been freely given grace. We have been released from our prison and given a second chance. Not only freedom, we have been given a new life.

What will we do with that life? Will we live it in judgment of others, chasing down “sinners” to condemn them of their sin? Or will we live it in humble gratitude, extending grace to others, showing them what God’s grace has done for us, and praying that they, too, will accept the beautiful gift of grace we’ve been given?

“It is the kindness of God that leads us to repentance” (Romans 2:4)

Linking up at The Cozy Book Hop.

10 thoughts on “Les Miserables: A Story of Grace”