My daughter and I head to church camp next week. Am I crazy to voluntarily spend four days with a group of 4th and 5th grade girls at age 41? Maybe. But I know how important a camp experience is for kids (if you want to know how important, read this post.) I also realize in a few short years my girl won’t want me tagging along to camp. So when she said she wanted me be a leader again this year, I signed us both up! (And who are we kidding…I love camp!)

Sitting in the leadership training last weekend, I realized that in my many years of camp experience, I’ve encountered several “rock star” leaders. These are the leaders who made camp memorable and successful for the campers, the other leaders, and even the camp staff. 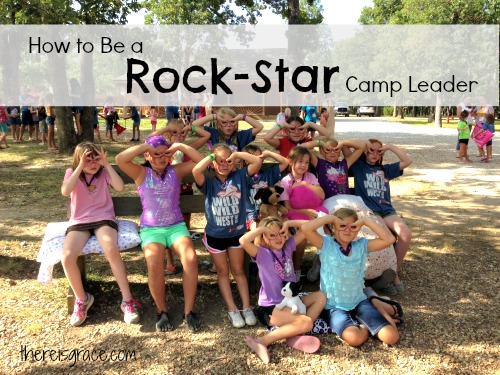 I’ve also seen some who, well…didn’t. If you’ve been to camp, there’s a good chance you’ve seen them, too…

My Way or the Highway Ray
Ray has certain preferences and doesn’t mind telling you about them. He doesn’t like potatoes, so he gripes about the food. He’s not a morning person, so he grumbles about the 7:00 am staff meetings. He’s not big on getting wet, so he thinks the water games are lame…and he lets everyone know. Don’t be this guy: Check your preferences at the door. Be a team player, and remember it’s not about you! Don’t like the top bunk? Determine you will love it for this week. (And dream about your own, comfy bed waiting for you at home!)

Clueless Carissa
Carissa’s group is always late and never where they’re supposed to be. It’s not because she’s new; it’s because she’s unaware and uninformed. She’s always one step behind her group so the more seasoned campers discover they can walk right over her, which they do mercilessly. Don’t be this girl: Be informed; read the rules and attend leadership training and meetings. Talk to other leaders and discover the no-nos and the must-dos. Most of all, remember you are the leader and follow the advice of my high school youth pastor: “When in doubt, take charge!”

Party Marty
Marty is all fun all the time. The campers love him, and he’s a big hit from the cafeteria to the activity field. So what’s the problem? He doesn’t know when to stop. His group is rowdy and out of control. They quickly learn to not take anything (including safety and rules) seriously. Camp leadership can’t trust him and end up spending valuable time and resources keeping on eye on him. Don’t be this guy: Be the adult. Have fun, but be responsible. When it’s time to be serious, lead by example. When it’s time to sleep, bring the energy level down and get some sleep yourself. Then when it’s time for fun, lead the way and party on!

Militant Marsha
Marsha is all business, no play. Her girls know the sound of her whistle (or shriek), and fall in accordingly. They march from event to event and eat in silence. They win the Cleanest Bunk award every year (you can bounce a quarter off those bunks!) They are the first to each activity and set out to win every event (and if they don’t, their leader is a poor loser.) Don’t be this girl: Relax, and have fun. This isn’t the army; it’s not even the Girl Scouts. There’s nothing wrong with winning events or having a clean bunk, but that’s not really the end-goal of camp. Remember, it’s OK to cut loose and have a little fun, too!

Rock Star Rick and Rebecca
Rick and Rebecca used vacation time to come to camp, but they realize this week is anything but a vacation; it’s not about them…it’s about the campers. They came ready to build relationships and invest in others. You’d never know they “aren’t the outdoorsy type” because they put on their big-boy and big-girl pants when they got on the bus. They are encouraging of others and cheer on the campers whether they are winning or losing. The campers love them…especially those who started out shy and withdrawn (because Rick and Rebecca made a point to draw them in.) They came ready to work hard and serve others. They eagerly jump in wherever they’re needed. That’s why they’re heroes, not only to the campers, but to the staff as well. Rick and Rebecca make every camp experience a success!

Do you have any rock-star camp experiences (either as a leader or a camper)?

7 thoughts on “How to Be a Rock-Star Camp Leader”