If I’m brutally honest (and let’s face it…I usually am here), I didn’t feel like writing today. OK, as long as we’re being honest…I wanted to write, but I just didn’t know what to say today.

So, being the disciplined writer that I am (ahem), I searched high and low for inspiration (meaning I read through some things I’d written long ago hoping I’d find something usable). That’s when I stumbled onto this little nugget from a couple years back when my now-independent-kindergartner was a mere preschooler (sniff).

Turns out…I really needed to read it again. I thought if I needed to be reminded of this truth, you might need to be, too? 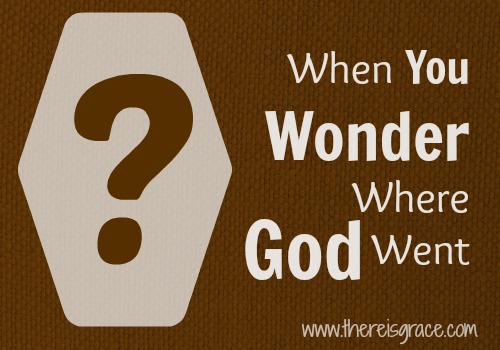 When I dropped my Little Man off at preschool this morning, a rare thing happened. Instead of giving his usual good-bye kiss and smile, he clung to me and wailed, “I don’t want to go, Mommy! I don’t want to go!”

If this had been his first day of preschool (or he had been my firstborn), chances are that’s what would have gone down. But this wasn’t his first day. It wasn’t even his first year! He has been coming to this preschool (at our church, mind you) for two years! Most days he hops out of the van with a smile on his face and returns at the end of the day excited about the things he learned, the songs he sang, and the friends he played with.

For some reason, that didn’t happen today. And by now we were holding up the car line.

So I gathered up every Super Mommy power I could muster, kissed his head, and hugged him tightly. I assured him I’d be back at the end of the day, and I handed him over to the loving arms of his teacher. As I climbed back into the driver’s seat, I watched his teacher carry him off as he reached for me screaming, “No, Mommy! Don’t go!”

Summoning the rest of my Super Mommy powers, I drove away…around the corner, out of sight…and cried.

Driving away from my screaming child went against every fiber of my being. The rational side of me recognized I had done the right thing (even if the emotional, Mommy part of me argued profusely!)

He would only be there a couple of hours, and he was in a loving environment with people who care deeply for him. Experience told me he would calm down and go on to enjoy his day.

I had to be strong and look at the bigger picture.

That’s when I realized how often I feel just like my Little Man. When life gets uncomfortable or circumstances don’t turn out the way I want, I look at God and scream, “What are you doing?! How could you just leave me here?! I don’t want to be here! Don’t leave me!”

The truth is, He doesn’t leave us. Ever. He has promised not to. Even when we feel alone. Even when we feel abandoned. He is right there…holding us, weeping with us, loving us through every moment. All the while, seeing the bigger picture. Seeing the other side. Knowing we will come through it stronger, more mature, and more dependent on Him.

Even though I physically drove away from my Little Man today, you better believe I called and texted his teachers until I was convinced he had calmed down and returned to his happy, easy-going self (which he did shortly after I left).

You see, as a mom my children are not “out of sight, out of mind.” If I…an imperfect, human parent…am that consumed with my child’s safety, his well-being, and his happiness, how much more our perfect Heavenly Father!

The LORD is a refuge for the oppressed, a stronghold in times of trouble.  Those who know your name trust in you, for you, LORD, have never forsaken those who seek you. Psalm 9:9,10

What are you going through today that makes you feel alone? God has not forgotten you. He has not abandoned you. He is with you. Hold tightly to Him.

9 thoughts on “When You Wonder Where God Went”