I answered the phone. “This is Susan, from Dr. So-and-so’s office,” said the voice on the other end. “I have the results of your PET scan.”

I’ve grown accustomed to calls from the doctor’s office, but I am not always braced for what they have to say. Susan continued…

“…Suspicious lesion around  your pancreas…come in for a CT scan to follow-up.” There it was. The bad news.

I had been on chemotherapy for two months already. The words “suspicious lesion” were not what I wanted to hear.

Plus, there was that odd pain I’d noticed in my right side. Since high school anatomy was two decades ago, I Googled “pancreas” and found out it’s located on the right side…in the exact location of my ache. Now it was officially time to worry. 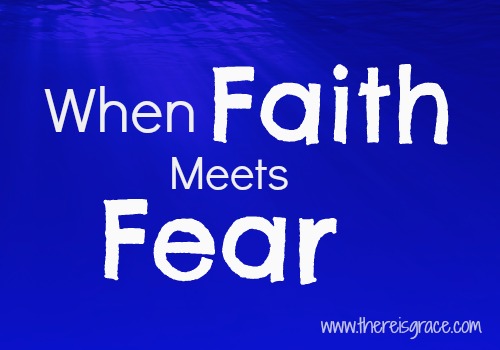 How could the cancer spread while it is shrinking the other tumors? one part of my brain rationalized. Cancer is a mystery; anything is possible the other side argued.

It was a week before Thanksgiving, and to be honest, I was ticked that I had to wrestle through fear and emotions again when I should have been focused on family and thankfulness.

Wasn’t it enough that I had staked my faith in what I know to be true? Did I have to do this all over again? Wasn’t a one-time victory over fear enough?

Honestly, no…once is not enough. Fear is an emotion, and we all know emotions come and go like the wind (more frequently for some of us than for others).

Fear is an emotion, and we all know emotions come and go like the wind

Fear is a normal, and natural, reaction to the unknown. I’m not the first to experience it. And I won’t be the last. Even the disciples  experienced fear. As a matter of fact, it almost got the best of one of them.

Peter wasn’t the type who was prone to fear. He was bold. He was brash. He was the one who challenged Jesus, “If it’s really you, tell me to get out of this boat…right here in the middle of the lake.” A typically-fearful person wouldn’t do that.

Peter wasn’t all talk either. He actually got out of the boat. He walked on top of the water…without a flotation device.

He was bold. He took a step of faith. Then he felt the wind pick up. He saw the clouds roll in. He heard the thunder in the distance.

And his faith melted away into fear. It happens to the best of us.

We step out in faith, believing God is going to come through. We’re going to get the job. The relationship will be mended. The scans will come back clear.

Then the winds pick up and the clouds roll in. They hire someone else. The relationship becomes more strained. The scans reveal a “suspicious lesion.”

Our faith melts and we begin to sink into a sea of fear. So, what do we do then?

If we’re smart, we do what Peter did.

Peter took his eyes off of his circumstances–off of the howling wind and rolling waves–and fixed them again on Jesus. He recognized his fear for what it was…a fickle emotion rooted in his circumstances.

And what happened next?

Jesus immediately reached out his hand and took hold of him” (verse 31).

When we cry out to God, He will not let us drown in our fear. He will rescue us. Every time.

We may have to wrestle fear again…and again, but we don’t have to be overwhelmed by it. Like Peter, we can learn that faith is not dependent on our feelings, but on the faithfulness of the One who calls us to step out of the boat.

Faith is not dependent on our feelings, but on the faithfulness of the One who calls us to step out of the boat.

So, whatever happened with that “suspicious lesion”? The CT scan showed it was just my normal, boring ol’ pancreas. So, see…no need for fear in the first place. 🙂

23 thoughts on “When Faith Meets Fear”